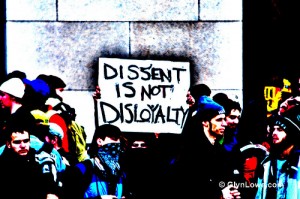 I am not alone in feeling overwhelmed and exhausted from the past year at Mary Washington. We’ve had too many deep, hurtful losses: personally, privately, and publicly; we’ve lost loved ones and trusted colleagues to cancer. We’ve lost brilliant and loving students to illness, to suicide, and – unconscionably—to murder.

All this loss should nevertheless be somehow bearable. We’ve tried our best to support one another, colleague-to-colleague, professor-to-student, student-to-student. We know that the pain will not disappear, but that time and the kindness of each other’s understanding will get us through and that we will arrive at a reconciling peace. We will see another year, welcome fresh faces to campus, and continue our work and lives.

But the context within which all this loss exists is hard to accept and has stalled our healing. Over the past year our publicly-identified feminist students have taken on campus issues with a sense of efficacy and secure in the knowledge that they–as are all students–are entitled to participate in the public sphere. Our students are active, they shape the debates, and they insist that their perspective be heard and taken seriously. They are leaders and leaders-in-making. I am so proud to know them and to have them in my classes. This is truly the good news.

One of those issues has been the campus rape culture—a recognized reality nationally:

The bad news, and the reality of what a tough battle social change efforts always are, is the resistance our most active, most thoughtful students have received. It seems unbelievable to many that a rape culture might exist at Mary Washington. Why does this reality seem to hard to acknowledge? What don’t we “get” about rape culture?

Here are some things that indicate a rape culture exists–not just on our university campuses, or on campuses throughout the country, but in the larger society. You may be (are) living in a rape culture IF:
(1) language, laws, images, lyrics, and jokes trivialize sexual assault, rape, and other violence against women.
(2) the victims of assault are blamed and taught how not to get raped (short skirts, walking alone at night, drinking alcohol, and dancing do not explain rape).
(3) sexist social norms dictate sexual prowess for men and purity for women.
(4) there seems to be confusion about when it’s technically not rape–coercing “yes” isn’t active consent.
(5) Freedom of speech claims trump Title IX protections and the civil right to freedom from a hostile climate.
(6) violent threats are excused as jokes with cultural context and chants are excused as tradition with no meaning.
For more ways to think about this, see:
Marshall University and Women Against Violence Against Women (WAVAW)

College campuses represent a crucially important view on and preparation for later adult life. And colleges provide institutional context–rules of the game–that shape a welcoming or threatening environment and teach university students what is expected from them and for them throughout their lives. Title IX is one rule that our students, in the end, decided they had no choice but to invoke. It’s not too late for Mary Washington to take the side of ALL its students and insist on shaping a campus climate in which all feel safe and all are included.

Rather than resenting the contentiousness that debate brings, UMW should be proud of its students, their engagement with their surrounding community and with issues relevant to their lives and within their own local and institutional context. Students insisting on LGBTQ respect and inclusion; students working to fight climate change where they can, by calling on their university to divest from fossil fuels; students insisting that their campus provide a safe space and that they be protected from cyber bullying and interactional hostility…and so much more. I remember years when the biggest issue mobilizing students was the University name change (not unimportant, I agree!) But I’d much rather be a part of a faculty fostering social change efforts and encouraging critical thinking and thoughtful activism among students. I’d much rather have my students, in Adrienne Rich‘s words, “claiming their education.”